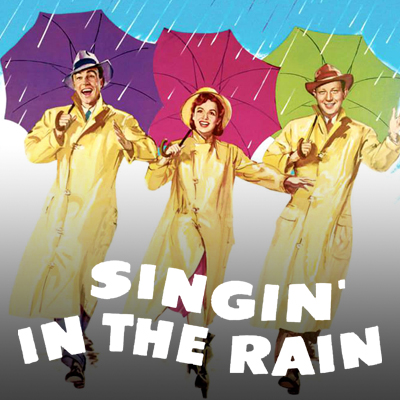 This event has been CANCELED!

Taking place during the rise of the “talkies”, we meet Don Lockwood and Lina Lamont who have risen to stardom during the silent-film era of Hollywood. Beautiful, charismatic and influential, the two combine to make a great on-screen pair. The introduction of talking pictures poses a threat to the powerful duo, however, when it is discovered by audiences that Lina has an excruciatingly shrill voice. Enter young studio singer Kathy Selden, a woman who lacks the stardom of Ms. Lamont but possesses the beautiful voice of which Lina is in dire need. Can Don and Lina find a solution to Lina’s laughably annoying voice to salvage their careers?

Starring Gene Kelly, Donald O’Conner, and Debbie Reynolds, in her breakout role, this classic is to be seen, rain or shine.