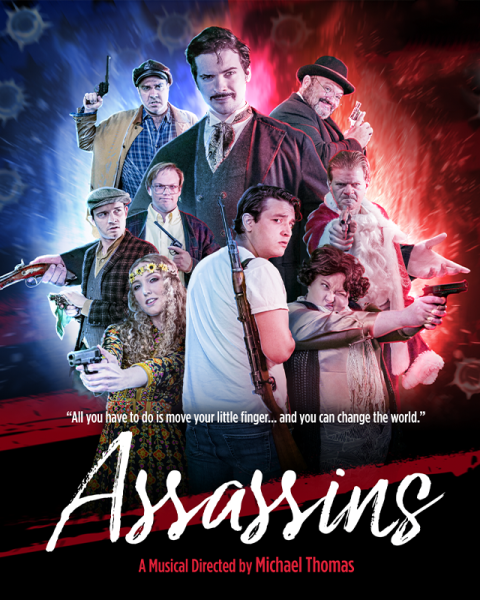 About Assassins the Musical

In this darkly humorous musical, Stephen Sondheim depicts nine misfit men and women who attempted (four of them successfully) to assassinate American Presidents. While every nation has its assassins and would-be assassins, only in America, the authors suggest, do disturbed and disturbing individuals act not because they hope to influence national politics, but because they are wrapped up in a malignant sense of entitlement. Feeling betrayed by the failed promise of American democracy and the American Dream, they strike out at the symbol for America: the American President.

A multiple Tony Award-winning theatrical tour-de-force, Assassins combines Stephen Sondheim’s signature blend of intelligently stunning lyrics and beautiful music with a panoramic story of our nation’s culture of celebrity and the violent means some will use to obtain it, embodied by America’s four successful and five would-be presidential assassins. Bold, original, disturbing and alarmingly funny, Assassins is perhaps the most controversial musical ever written.

Assassins spans several musical styles and many decades in a dizzying series of musical and theatrical inventions that culminate in the assassination of John F. Kennedy.

Brought to you by our proud Blackbox Series Presenters: Hudson & Essex and Cypress Hill Winery

With additional support from Hitchman Bail Bonds. Thank you Hitchman!