MANSFIELD — The perfect rib is often compared to a loving relationship—tender and sweet with a little bit of twang, and at North Central State College’s annual Rock-n-Ribs you’re encouraged to have multiple relationships.

“Cooking ribs is like a good marriage, take it low and slow and you’re going to have a good product every time,” Smokin’ Joe’s Hog Wild Barbeque griller Tony Benson said.

Benson was just one of five rib vendors and one of six sauce vendors competing for the top spot in the celebrity and people’s choice competitions. Vendors started slow cooking their meats in wood smokers Wednesday night to get the flavor just right.

Benson, a Richland County Correctional Officer started cooking ribs with retired officer Joe Henderson 11 years ago, mainly using his vacation time to serve up their award-winning ribs at festivals across six states during the summer. It’s their third consecutive year serving at Rock-n-Ribs.

The duo came loaded with 450 slabs of ribs, hoping for a hometown advantage.

“Of course we’re going to win, I’m at home,” Benson said. “I have to represent at home.”

Next door, Porky Chick’s BBQ is heating up the competition with its 17 herbs and spices, slow-cooked ribs. It is the Arkansas-based vendor’s debut at the festival.

“People talk about Memphis style or Kansas City style ribs, but we’re from Arkansas, we’re in between,” owner Mark Grant said. “If you bite in the middle, there should be a perfect half moon.” Most who tried his award-winning ribs agreed.

“This is all the reason we come out,” said Christine Edgell, holding up a saucy rib. “These are some of the best ribs around.” “It’s good,” her nearly 4-year-old daughter, Aria, shouted, holding up a rib, cleaned to the bone.

But visitors shouldn’t be fooled by flashy tents and a line of trophies. Smaller vendors such as Brad and Bonnie Bogner can carry their own on a grill. Their Bogey’s BBQ ribs never leave the authentic wood-smoke grill unless they’re about to be devoured.

Mayer Tim Theaker, a judge for the rib contest, said his favorite was one that “when I first tasted it had a little sweet, but as it sat in my mouth, it got hotter.”

The winners of the contest will be announced Friday and Saturday evening.

Rib vendors weren’t the only ones competing for a title. Budweiser is hosting a Battle of the Brews competition all weekend as well. Visitors can sample 10 beers and vote on their favorite.

Nationally-known bands also are featured throughout the event, including Firehouse, Here Come the Mummies and Kenny Wayne Shepherd.

Other performers include Departure, Duff, Sobos, The Jimmy Warner Band and Ohio Express.

It was the first Rock-n-Ribs festival for NCSC President Dorey Diab, who said he was impressed by the event.

“It’s really great for the college to be able to serve the community,” Diab said. “I’m calling it the community festival.”

All proceeds benefit the North Central State College Foundation and used for student scholarships, he said. 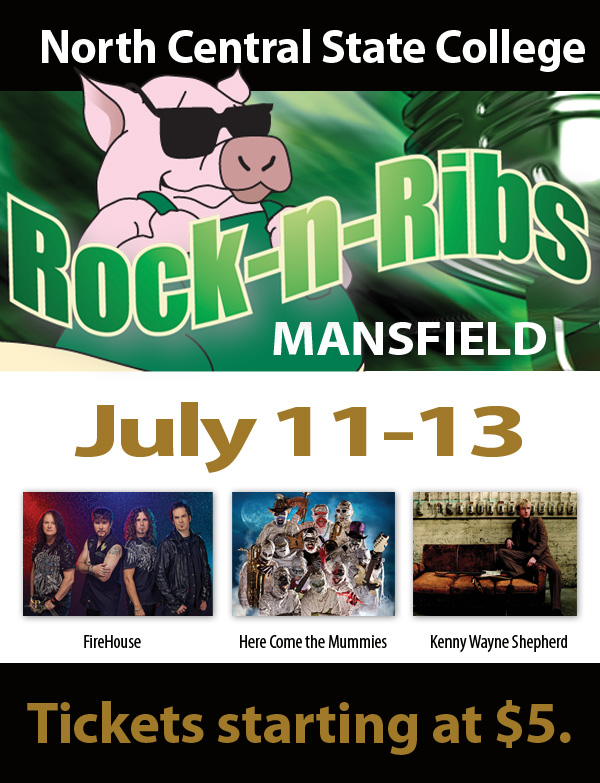