Teen cashier dreams of President’s visit; he dubs her “psychic”…
President Obama on Wednesday afternoon made his first “unscheduled” stop in August for an eat n’ greet in Mansfield, Ohio, after speaking to a crowd in a park. At about 1:30 PM the President dropped by the Squirrel’s Den on North Main Street, a shop that specializes in hand-dipped chocolates and fudge. He selected sweets for a summer camp care package for daughters Malia and Sasha, and nabbed a box of chocolates for his wife. (Above: The President surveys the selection with owner LaDonna Secrist)

“Malia and Sasha left me for the summer,” President Obama told the teen-aged cashier on duty.

“They’re off at camp. And I don’t want them to forget me so I was thinking about putting a little care package together. What do you think?” 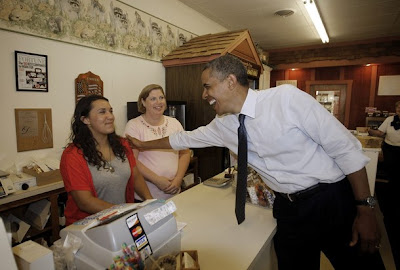 Cashier Lia Brunetti, 19, of Mansfield, thought she was re-living a dream. (Above: The President with Brunetti)

“I actually had a dream about you coming in here,” Brunetti, told the President, beaming.

“Did you? You see that?” he responded, smiling.

“I’m like, you are literally making my dream come true,” Brunetti said.

“You are psychic,” President Obama declared.

“Maybe I can market myself like that, I can pay for school,” said Brunetti, a sophomore at the University of Pittsburgh. 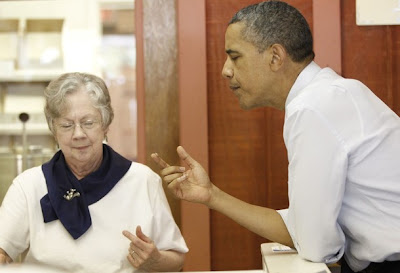 Owner LaDonna Secrist took over for the fudge selection as President Obama peered into the case. Secrist squeezed a bit of fudge onto the President’s finger so he could sample it. (Above: The President checks out his finger-tip sample)

“That’s some amazing chocolate right there,” President Obama said to the gathered gang of media.

“Do you have a place to keep it cool?” Secrist asked the President.

“Yeah, well, I’ll have to get it back to the plane, but once I get to the plane it’ll be OK,” the President said.

Secrist, gesturing at her equipment, explained the house secret for “amazing” chocolate, which was inaudible to the press pool.

“I didn’t realize I’d get this display of how this chocolate is made,” the President said.

The visit to Mansfield, where the President spoke to more than 2,000 citizens at Mansfield Central Park, began the President’s ninth trip of the year to Ohio, where he received 52 percent of the vote in 2008. He was last in Ohio in the first week of July, where he had a culinary odyssey while rolling through the state on his tour bus, Ground Force One.

In Ohio, the President devoted himself to comparing his tax plan to that of rival Mitt Romney, building his argument around a newly released report from the Tax Policy Center. Mansfield is home to small auto suppliers and manufacturers, and Akron is the nation’s tire and rubber capital.

On Thursday, the President heads to Florida for more campaign events.